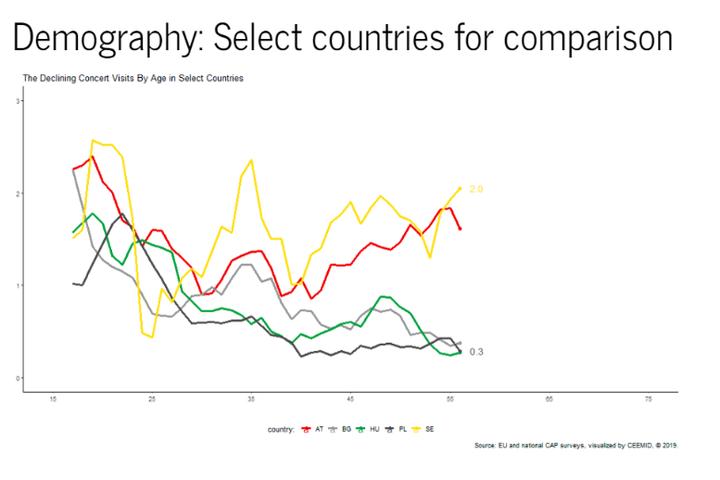 We had the first public and panel discussion of the forthcoming Central European Music Industry Report. After mapping and analysing in depth the music industries of several CEE countries, I put together with the help of Consolidated Independent and state51 a regional report in previously unseen detail.

You can review the whole presentation here (10Mb self-contained HTML file, takes some time to load).

After mapping and analysing (see most recently Slovakia) in depth the music industries of several CEE countries, with the help of Consolidated Independent I put together a regional report in previously unseen detail.

The live music part explains the different demography and other demand drivers of the CEE region for concerts, resulting in high seasonality, low venue profitability, an unusually high vulnerability of small venues – and as a result an unusually strong music festival scene.

For recordings, the report shows the royalty gap in comparison to Western Europe and the difficulties of labels and publishers to create value added to musicians. In the absence of a fully functional recording market, musicians are more reliant on collective management revenues than in the rest of Europe – yet in many countries collective management has profound difficulty in asking the correct price for music or collecting it.

When analysing the music flows among European countries, and the export-import flows of other emerging markets in Latin America and the worlds most stable ones, like that of the United States, Brazil and Japan, we must realize that these nations face an uphill battle to get into the better paying markets and at the same time to protect their domestic market from increasing import substitution.

Music grants could be an important tool to balance the disadvantaged position of CEE musicians in this global competition. Austria and Hungary has a strong popular music support program, but usually the availability and suitability of grants is lower in those countries where musicians and their technical and managerial team would need it most.

I am very grateful for the support given by Consolidated Independent in the making of this report. CI is the market leader in managed services for the digital music industry, connecting the best independent music with the opportunities of the global market. With their data science team, we put together data from about 700,000,000 royalty statement documents about the whole region. I believe that this is the first time that a global player releases large amounts of data to help understanding the changing music landscape in the era of digital streaming. Equally thankful for Franz Hergovich (Music Austria) for inviting us to discuss these findings on Waves Music Showcase Festival and Conference on 27 September 2019 with Márton Náray (SoundCzech) and Péter Benjámin Tóth (Artisjus). And of course, the most important people to thank for are the more than 2000 musicians, managers and technicians who participated in the CEEMID Music Professional Survey, which is one of the main data sources of this report, where no other information was available. You can find out more about the data sources here. The report will be shortly released in a free downloadable ebook, and musicians, who requested it, will receive their personalized mini-reports shortly.

All feedback is, as always, welcome.