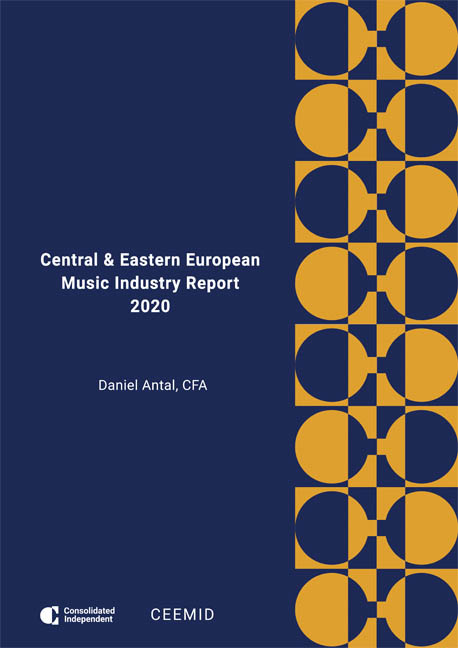 We will present to the audience the Central European Music Industry Report 2020 on the CCS Ecosystems: FLIPPING THE ODDS” Conference – a two-day high-level stakeholder event jointly organized with the European Commission, DG Education and Culture.

CEEMID & Consolidated Independent will present to the audience the Central European Music Industry Report 2020 (will be availale in all formats on the presentation day) on the CCS Ecosystems: FLIPPING THE ODDS Conference – a two-day high-level stakeholder event jointly organized by Geothe-Institute and the DG Education and Culture of the European Commission with the Creative FLIP project.

Creative FLIP stands for Finance, Learning, Innovation and Patenting is a Pilot project co-funded by the EU whose main objective is to support healthy and sustainable ecosystems for Cultural and Creative Industries (CCIs) with respect to these four key policy areas.

The first Central European Music Industry Report is the result of a co-operation that started among stakeholders in three EU countries five years ago to measure the economic value added of music – the basis of a modern royalty pricing system. This gave birth to CEEMID, originally the Central & Eastern European Music Industry Databases, a data integration programme that now in 2020, covers all of Europe. CEEMID fulfils similar roles to the planned European Music Observatory and supports all pillars of the future pan-European system.

The comparison of Western and Eastern music audiences reveals key demographic differences that make the unchanged adoption of business practices from mature markets in the region questionable. Chapter 2 of this report will show these differences and their consequences on music markets, in terms of visiting and acquisition likelihood, frequency, seasonality and purchasing capacity. This is an example of how CEEMID fulfils the role of Pillar 3 (music, society and citizenship) in the planned European Music Observatory.

Chapter 3 contrasts market demand with the supply strategies of musicians. CEEMID has been surveying music professionals, including artists, technicians and managers about their working conditions, market conditions and plans for five years across a growing number of countries. In 2019 we invited 100 national and regional stakeholders to distribute our surveys. In some countries, our surveys already have several years of historic data, making the resulting musician database probably the largest ever source of data about how music is produced and how musicians live. We are constantly looking for partners to roll out this survey to new countries in new languages.

The CEE region has comparative advantages in big music events like festivals, and it has become one of the most important hubs for cultural tourism in the world. We explain this phenomenon in Chapter 4 by showing the differences in demand composition, demography and supply of venues in the second chapter. The lack of a modern and dense network of permanent music venues gave rise to magnificent music festivals in the CEE. Open’er, Sziget and Exit are among the biggest and best festivals in the world, closely followed by several smaller festivals in all countries. The share of festivals in the live music market is many times higher than in Western Europe and they provide vital export revenues to the local music economies. However, they play a limited role in finding new audiences for local artists, as they are increasingly programming for Western audiences by providing shows of international hits. They can only very partially fill in the gaps left by the small venue problem that hit the emerging markets harder than the UK or Australia, where policy action had been already taken to reverse the decline of the availability of smaller live music venues.

On the recording side, our analysis shows that modern digital services are growing at a faster rate than in mature markets. Because of lower repertoire competition, streaming quantities are similar for a typical Austrian, Czech, Hungarian, Polish or Slovak track than in the mature markets. However, revenue growth is limited because of the interplay of several analysed factors. Our analysis of the live and recorded music markets shows that CEEMID fulfils the roles of the Pillar 1 (music economy) of the planned European Music Observatory.

Most recorded music sales revenue in the region comes from streaming platforms, just like in the mature markets. Successful sales strategies require a solid knowledge of the global marketplace and the ability to understand and train sales algorithms. Micro-enterprises, such as independent labels, have very limited ability to cope with these functions, given that they do not have market research or R&D functions. CEEMID and Consolidated Independent have started initiating open, national R&D consortia to create the necessary concentration in data assets, analytical capacity and budgets to close this gap. As a first step, CEEMID and Consolidated Independent have created a large, independent music dataset based on hundreds of millions of royalty statement entries to create our market indexes, styled after stock market and bond market indexes. Streaming opportunities are fast changing as roll-out of streaming services is happening at a different rate in various territories; subscription charges and the exchange rate to the producer’s currency vary and repertoire competition emerges in the market. Our volume and revenue indexes in Chapter 5.3 are aimed at creating sales algorithms that optimize sales volumes and expected revenues. We believe that this analysis also reveals that CEEMID partially fulfils the roles of Pillar 2 (music diversity and circulation) and feeds important data into Pillar 4 (innovation).

The region has far bigger untapped potential than most music business executives believe. Households in the region spend a significantly lower share of their recreational budget on music than their Western, Southern or Nordic peers. The region has a lot of untapped cultural purchasing power because servicing is particularly challenging in both the live and recorded sides of the business.

This upside potential cannot be tapped without better pricing. Royalty levels are often very low in the region. Due to many combined effects analysed in this short report, the gap between royalties earned in the CEE and Western Europe is several times bigger than the difference in GDP or national average wage. These gaps are partly caused by special interests preventing collective management from charging appropriate tariffs for restaurants, media companies or electronic appliance importers and manufacturers, and partly by unfavourable taxation of cultural products and services.

CEEMID was designed to create economic evidence on royalty pricing, private copying compensation and the creation of economic value added in the industry. In the first Hungarian Music Industry Report of ProArt and in the first Slovak Music Industry Report we have shown that economic and taxation policies of the CEE countries aimed to support car and electronics manufacturing create a distorted, unfavourable economic regime for creative industries. We want to help local stakeholders with economic evidence to correct these discriminatory policies during the overhaul of the EU VAT system. We have been helping various national organizations with economic evidence, presented in the light of latest EU jurisprudence, to improve their pricing activities. Our thousands of indicators were also used in ex ante evaluations of granting schemes.

In 2020, all EU member states will change their copyright administration legislation because of the national implementations of the 2019/790 Digital Single Market directive. CEEMID provides evidence in several countries about the size and impact mechanism of the value transfer, and generally the widespread use of the copyright exemption for private copying. We believe that the thousands of pan-European music industry indicators that we have aggregated over the five years will play a vital role in these regulatory processes.

CEEMID fulfils its roles with a very thorough exploitation of the EU’s 17-years-old Open Data regime with the re-use of public sector information, and a very careful mapping of the music industry. These maps help us conduct annual surveys among musicians and the audience, and they help us connect (always with pre-approval and with a user mandate) to industry databases. We do not only cover the EU countries, but increasingly (potential) candidate countries and neighbourhood countries.

In our vision, this data collection and integration, i.e. Pillars 1-3 should be available for all music stakeholders, should remain public and publicly funded. The last Pillar of the observatory, innovation, is where private entities should compete. The founders of CEEMID and Consolidated Independent believe that this report demonstrates the business and policy benefits of such a system with the analysis of the Central & Eastern European music markets. We believe that this way CEEMID is in a position to serve most of the planned functions of the envisioned European Music Observatory, and we are looking for ways to make either our thousands of indicators, or our data collection and integration software open source and available for all stakeholders in the EU and its neighbours. CEEMID was born out of necessity to level out the different levels of public research and statistical coverage of the EU member states. In our view, private entities in the future should focus their investments in Pillar 4 of the planned observatory, i.e. competing in innovation with creating new models, algorithms and services based on data that is available throughout the European Union without giving further advantage to the already mature markets.