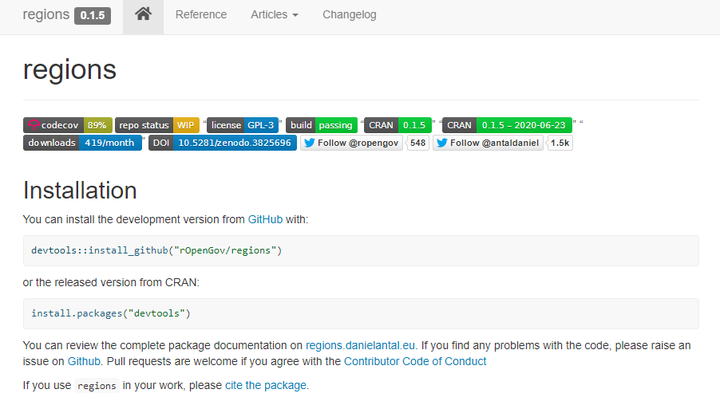 You can install the development version from GitHub with:

or the released version from CRAN:

You can review the complete package documentation on regions.danielantal.eu. If you find any problems with the code, please raise an issue on Github. Pull requests are welcome if you agree with the Contributor Code of Conduct

If you use regions in your work, please cite the package.

Working with sub-national statistics has many benefits. In policymaking or in social sciences, it is a common practice to compare national statistics, which can be hugely misleading. The United States of America, the Federal Republic of Germany, Slovakia and Luxembourg are all countries, but they differ vastly in size and social homogeneity. Comparing Slovakia and Luxembourg to the federal states or even regions within Germany, or the states of Germany and the United States can provide more adequate insights. Statistically, the similarity of the aggregation level and high number of observations can allow more precise control of model parameters and errors.

The advantages of switching from a national level of the analysis to a sub-national level comes with a huge price in data processing, validation and imputation. The package Regions aims to help this process.

This package is an offspring of the eurostat package on rOpenGov. It started as a tool to validate and re-code regional Eurostat statistics, but it aims to be a general solution for all sub-national statistics. It will be developed parallel with other rOpenGov packages.

Sub-national Statistics Have Many Challenges

Raise and issue on Github or get in touch. Downloaders from CRAN: