Musicians’ Living Standards And Life Satisfaction In The CEE Region 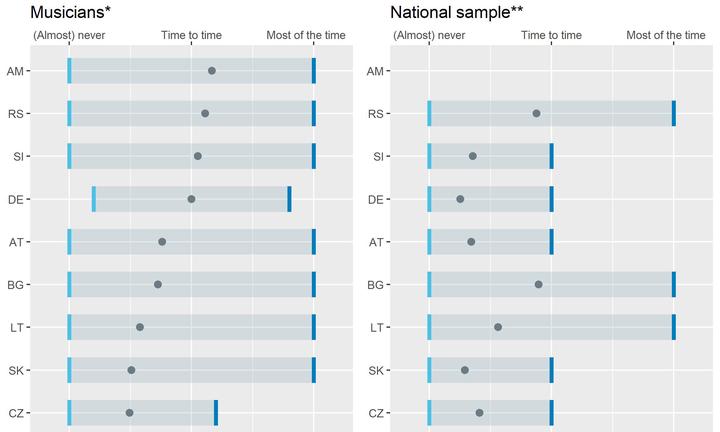 In order to get a high-level comparison among the living standards of musicians, we use the standard survey question used in Eurobarometer surveys for decades: how often have had the respondent difficulties with paying bills in the past year? This is a very good starting point because it makes comparable the rough material standards of musicians and other professional groups in the EU, irrespective of local earnings and living costs.

Musicians everywhere, including rich countries like Germany, Austria and Slovenia have more problems with paying their bills than the general population in their countries. The only seemingly different country is Bulgaria, but in this case, the self-reported difference is small, and generally Bulgarian musicians and other Bulgarian people have similarly frequent difficulties with paying their bills.

In the emerging music business countries, it is very important to see that the musicians not only earn little money, but as freelancers their income is mainly based on live performances, peaking in the festival season and in December. This income is usually taxed at far higher rates in the CEE region than in Western Europe or in non-creative industries. Royalties, which should balance variable live performance earnings are far lower both as a percentage of total musician income and in euro terms than in advanced markets. This is often coupled with higher taxation, too.

To avoid the bias of higher satisfaction levels in richer environments, we measure musician’s self-reported life satisfaction levels against the national averages from the 2018/11 Eurobarometer sample, scaled between the numerical values of -2 (not at all satisfied) to 2 (very satisfied).

Career in music can lead to higher life satisfaction than other similarly paid jobs in Europe. However, music market stakeholders should focus on increasing the level of music professional earnings and reducing its variance within the year and over the years, because the material living conditions of musicians is significantly worse than the conditions of the general population.

You can read a lot more about this research here.